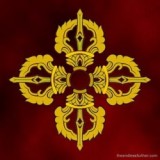 By Tibetan Community in Britain

NKT followers are mostly non-Tibetan Westerners in monks’ and nuns’ robes. Increasingly, they have adopted aggressive strategies to undermine the Dalai Lama across the world, in the form of social media campaigns and public demonstrations outside teachings and talks by His Holiness.

In doing so, the International Shugden Community has aligned itself with the Chinese Communist Party authorities in Tibet, who have been engaging in a systematic ideological campaign against the exiled Tibetan religious leader; a key element of their policies aimed at undermining Tibetan religion and culture.[3] In Tibet, Dolgyal worship is actively financed and promoted as a means of dividing Tibetans and of undermining the Buddhist religion. Discouraging worship of the spirit is now a criminal offence in Tibet, for which one man was recently imprisoned for 10 years.

Clearly aware that the main allegations of its demonstrators are easily disproven, the ISC has made increasingly outrageous claims against His Holiness. ISC propaganda for instance, features an offensive depiction of the Dalai Lama as a pig. And appearing to believe it is an insult to characterize someone as a ‘Muslim’, the Dalai Lama is described by the ISC as a ‘Muslim masquerading as a Buddhist’, and, echoing the allegations of the Chinese government in Beijing, he is also compared to Hitler.[4]

The Tibetan Community in Britain is deeply distressed by this inflammatory and extremist campaign against His Holiness the Dalai Lama, one of the world’s most respected religious teachers and the beloved leader of the Tibetan people. We condemn the protests and baseless allegations against His Holiness made by Dolgyal Shugden organisations. We would like to take this opportunity to express our deepest respect and confidence in His Holiness the Dalai Lama and his advice on the dangerous nature of the practice of Dolgyal..

‘Shugden: A History: – by the Shugden Research Society, published by Tibet House, New York, US, 2014 [Available via Amazon]

[1]Over the past few years, the Home Office-funded research group ‘Inform’, whose task is to provide the UK -Government, NGOs and the public with neutral information on -New -Religious Movements, has received more queries about the NKT annually than any other organization.

[3] In 2014, the Chinese government issued a new internal directive, promoting  propitiation of -the controversial Tibetan Buddhist spirit in a bid to further discredit the Dalai Lama -,http://goo.gl/wMwiqb

[4]Even former members of the organisation, who describe themselves as ‘survivors’, have condemned the ISC demonstrators for making “completely unwarranted allegations and insults” against His Holiness: http://goo.gl/Kc4GdH