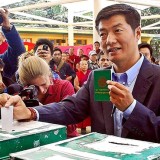 We would like to inform you that the Office of Tibet, London has sent us an official Circular from the Central Tibetan Administration’s Election Commission – calling on the formation of the Northern Europe Regional Election Committee.

As per the Circular, the Tibetan Community in Britain will be putting forward names of six (3 Committee Members and 3 Observers) members from our community to form this Committee. The Committee’s primary role would be to oversee the 2016 General Election for Sikyong (Political Leader)  and two Chithue (Tibetan MPs from Europe)

As the CTA’s Election Commission requires the names of this Committee with their bio-data by the 20th of May, in consultation with the Office of Tibet, the Council of Tibetan Community in Britain are calling the polling day on Sunday, 17th May 2015 which coincides with the Solidarity Event for the Panchen Rinpoche at Kailash Centre organised by the Office of Tibet. Since both events are happening at the same venue, we urge maximum participation. Three Members from within UK

One member each from: Denmark, Ireland, Norway, Sweden, Poland

Three from within UK

One each from: Denmark, Ireland, Norway, Sweden, Poland

The Tibetan communities (in UK, Denmark, Ireland, Norway, Sweden & Poland) should arrange for the election, from within the community, of one member and one observer to the Regional Election Committee of Northern Europe.

After the conduct of elections, the votes cast will be sealed, in the presence of the Election Committee member and observer, and the council members of Tibetan community. This will be sent to Office of Tibet, London.

Two-thirds of Nine, i.e., 6 Members. Two Members will have to travel to London from outside UK

Two-thirds of Eight, i.e., 5 Members. Two Observers will have to travel to London from outside UK