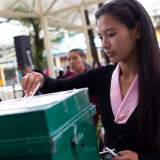 Dear Tibetans in the UK,

The important dates relating to election are:

As responsible stake-holders in the democratic process, it is the duty of the Tibetan electorate to cast their votes and to thus make it count.

The UK Committee members and Observers, serving on the Northern Europe Regional Election Committee, hereby request all eligible Tibetan voters to ensure their names are registered with the Committee. Please note that REGISTRATION IS A MUST TO VOTE in this Tibetan election.

Every Tibetan (18 years and above) who wishes to register to vote must hold Tibetan voluntary contribution book (also known as Green Book) and must have paid all Chatrel dues up-to-date*. (Those reaching 18 years of age as on 18th October 2015 can also register to vote, with same conditions as above.)

The last date for registration is 28th August 2015. Please hurry up and register before it is late.

For any other queries relating to election, please contact the Committee Members/ Observers or The Office of Tibet, London. We will try our level best to attend to your queries/doubts as promptly as we can.

The names of the elected Members and Observers, serving on the Northern Europe Regional Election Committee are: