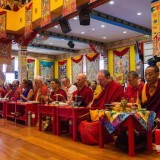 Over the past few years I have been requested, on many occasions, to offer a tribute to His Holiness, here in London, in celebration of his birthday. Previously, I wrote a speech, which was shared on my behalf, but I was not able to make it in person, on account of the retreats I was holding in Dzogchen Beara and in Lerab Ling. This year, however, I’ve made a special effort to change my program to suit this special celebration of his 80th birthday. So I am very happy that I can be with you here today.

On this occasion we are here to celebrate His Holiness the Dalai Lama’s 80th birthday. This is particularly moving and meaningful for me. I can remember so vividly His Holiness coming to the United Kingdom in October 1973, on his first ever journey to the West. I had the honour and blessing of playing a small part in arranging his visit. That was more than 40 years ago. At the time, who could have imagined the impact and the influence that His Holiness was going to have on the world?

Just a few days ago 120,000 people, mostly young people, at the Glastonbury Festival greeted him with wild enthusiasm, and joined together in singing “Happy Birthday” for His Holiness. This tells us so much about him. Because he has become so known and so loved the world over, as one of the greatest leaders of our time, as a champion of peace and non-violence, and as someone who is deeply concerned about the big problems facing the world, and who devotes his entire life to the welfare of humanity. With his message of kindness, compassion and universal responsibility, he has touched, and transformed the lives of millions of people, of any or no religion, rich or poor, young and old, and lit in their hearts a flame of hope, inspiration and courage. People everywhere have warmed to him, as he inspires so much love, joy and warm-heartedness. We all seem naturally drawn to his uplifting, optimistic vision of a more caring, fairer and saner world, because we recognize that the human values that His Holiness promotes—of love, forgiveness, tolerance and concern for others—hold the key to the inner strength, confidence and happiness that we are all searching for today.

Acknowledging that there are many who do not follow any religion, and deeply concerned by the stress, anxiety, depression and loneliness he sees all over the world, His Holiness tirelessly speaks of a universal “secular ethics”, a new way of thinking about spirituality and compassionate behaviour. Instead of our usual “us and them” mentality, he says: “The time has come for each one of us to start thinking and acting on the basis of an identity rooted in the phrase ‘we human beings’.” The essence of his message is that we can train our minds and hearts—that is, transform our attitudes and ways of thinking by training the mind in love and compassion, and so discover inner peace, contentment and joy.

If we recognize our shared humanity, and the interdependent nature of our world, we see that our well-being is intimately interconnected with that of others. This will naturally inspire us with a sense of responsibility and altruism. So His Holiness encourages us to be what he calls “wisely selfish”, because by looking after others, we discover our own welfare is taken care of as a matter of course.

The extent of His Holiness’ achievements is simply staggering. For over forty years, he has travelled all over the world, sharing his message of universal responsibility and compassion. And he is a leader who totally embodies his message. He has no ‘off-duty personality.’ He is who he is, whether he’s at home or ‘at work.’

I will never forget his reply when I congratulated him for being awarded the Nobel Peace Prize in 1989. He said:
“I consider this prize to be some kind of recognition of my motivation and its sincerity. So essentially, the credit goes not to this monk Tenzin Gyatso, but rather to the sincere motivation of altruism. “Every human being has the same potential for compassion; the only question is whether we really take any care of that potential, and develop and implement it in our daily life. My hope is that more and more people will realize the value of compassion, and so follow the path of altruism.

“As for myself, ever since I became a Buddhist monk, that has been my real destiny—for usually I think of myself as just one simple Buddhist monk, no more and no less.”

With these words, it is almost as if His Holiness was actually handing the Nobel Peace Prize on to us—the people of the world—to encourage us all to follow his footsteps and put compassion at the heart of our lives.

His Holiness has an extremely modern and forward-looking outlook. Thinking deeply of our common future, he has brought the wisdom and contemplative methods of Buddhism into close contact with the sciences, medicine, psychology and other disciplines. This revolutionary dialogue is already having a profound impact both in the East and the West, and I know it is going to produce far-reaching effects on society and on education, and for our future generations on earth.

As we saw at Glastonbury, His Holiness always reaches out to young people, as he recognizes that they carry the future of the world in their hands. This is why he is so concerned about education. He says: “My hope and wish is that one day formal education will pay attention to what I call education of the heart.” He means it will include inner values such as warm-heartedness, love, compassion, justice and forgiveness.

Above all, His Holiness always urges us towards taking action. Last week, he said: “At the recent Nobel Peace Laureates’ meeting in Rome we declared the need to address the elimination of nuclear weapons. We agreed that the time for just talking is over; we need to set deadlines for action and meet them. World peace likewise cannot be achieved by prayer alone. We have to take action.”

His Holiness has become one of the leading spokesmen for the preservation of the environment. He applauds Pope Francis’s recent passionate call to action. His Holiness asks: “The earth is our only home. If we do not look after this home, what else are we charged to do on this earth?”

Likewise the Dalai Lama has spoken out very strongly many times about economic inequality, and the gap between rich and poor. He has called this “a moral crisis”, that is responsible for world hunger, and is due to a lack of compassion. In this way, His Holiness has become a spokesman for the poorer and powerless people of the earth.

As a great spiritual leader, the Dalai Lama is a pioneer in building understanding between the faiths, and has attracted admiration and respect from members of all faith communities. He has prayed in mosques, temples, synagogues and cathedrals alike.

He has helped to give Tibetan Buddhism its rightful place among the world’s major religions. It is thanks to him that its science of the mind and compassionate practices have begun to take root so very widely in the contemporary world. As a great Buddhist master, His Holiness has also ensured and strengthened the authentic living lineages of Tibet—which themselves maintain the pure Nalanda tradition—so they can thrive long into the future.

At the same time, he has encouraged a spirit of non-sectarianism, and inspired an open, modern outlook, and an awareness of science and current issues, among Tibetan Buddhist leaders and Tibetan society. You can say in fact that he has integrated modern thinking into Buddhism. He is always reminding us that Buddhism is not simply prayers and rituals, but is all about transforming the mind.

As a Tibetan, I feel an infinite sense of appreciation and gratitude for the way in which His Holiness has helped us maintain our Tibetan identity, culture and spiritual heritage, and taken care of the Tibetans in every way imaginable. He has been our guiding light and our refuge during the most difficult period of our history.

All the great Tibetan masters have directed their blessings and prayers toward him, and all the Tibetan people have placed in him all their aspirations and hopes. So, with all my heart, and with sincere devotion, I wish that His Holiness live for many, many more years in the very best of health.

In fact, His Holiness doesn’t look 80; he looks like someone in his 50s! A few years ago, when he had a minor operation, the doctors said that his internal organs looked like those of someone who was 30 or 40 years younger. So he will certainly be able to live long. I pray that he will see all his aspirations for humanity and Tibet come alive and bear fruit, one by one, and without any obstacle or interruption. I pray that during this lifetime, he may return to Tibet.

“I firmly believe, therefore, that His Holiness will soon be able to return to the Potala in Lhasa and that Tibetans both inside and outside Tibet will come together and meet once again. For me there is no doubt that this will happen very soon.”

Because now at this time, as we face so many global challenges, His Holiness’ influence, his presence and his voice become increasingly important, and his leadership more and more vital. For he embodies not only the highest hopes of the Tibetan people, but the deepest wishes of so many men and women throughout the world.